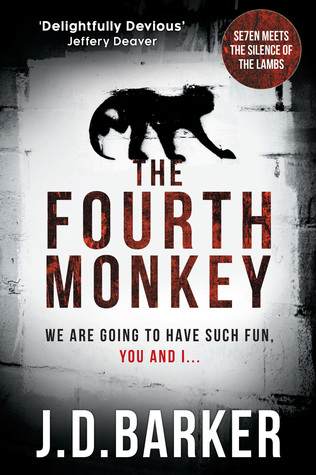 Se7en meets The Silence of the Lambs in this dark and twisting novel from the author Jeffery Deaver called, “A talented writer with a delightfully devious mind.”

For over five years, the Four Monkey Killer has terrorized the residents of Chicago. When his body is found, the police quickly realize he was on his way to deliver one final message, one which proves he has taken another victim who may still be alive.

As the lead investigator on the 4MK task force, Detective Sam Porter knows even in death, the killer is far from finished. When he discovers a personal diary in the jacket pocket of the body, Porter finds himself caught up in the mind of a psychopath, unraveling a twisted history in hopes of finding one last girl, all while struggling with personal demons of his own.

With only a handful of clues, the elusive killer’s identity remains a mystery. Time is running out and the Four Monkey Killer taunts from beyond the grave in this masterfully written fast-paced thriller.

This book made its way to me after a very lovely email that was in my inbox, it intrigued me from the very start of the email and I really couldn't say no, it was well, right up my street. Once it got here though, I planned to read it closer to the date of when I planned to review it. It actually took a trip with me to Southampton on the 1st of June and I read maybe 10 pages on the coach on my way back home on the 2nd of June, I was hooked but because of the coach I wasn't comfortable enough to want to carry on so I simply read the 400 pages in 1 sitting the following day with zero shame.

Gripped from the get go I probably spent the majority of my time open mouthed because things caught me of guard. I'm going to try and not give away too much so that may mean that this review is short compared to the others but I'm going to push it as far as I can.

Unusually the beginning of the book well, tells of the death of The Fourth Monkey Killer, he happened to me on his way to post a clue to his final victim which the police know all about but this discovery quickly puts the team in action to find the victim before it's too late. The book takes on 3 points of view, one is that of Detective Sam Porter, the second point of view is a Diary of The Fourth Monkey Killer which Sam reads and the the final point of view of the final victim of the Killer.

Throughout the book we follow each point of view, each more thrilling and gripping and just making you need to carry on reading, It's gruesome, to some it's probably distressing and at points unbearable. An utterly gripping storyline, exceptionally graphic, and definitely not for the squeamish or weak stomached if I should say. It played with my emotions for sure and was really impossible to put down.

I don't think I can shout my praise any louder for this book, so many twists and unexpected points, I probably swore in surprise several times throughout, there's no way this book cant get lower than a 5/5 from me, I can definitely see it being a big crime/thriller of this year, I really hope some fans of those genres pick it up and read it because you definitely wont regret it.